Thunderhead (Arc of a Scythe #2) by Neal Shusterman 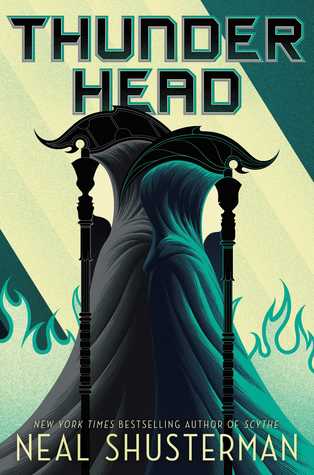 This is the second book in the Arc of a Scythe series and it is so good! It dives in roughly a year after Citra received her ring and Rowan has gone rogue, going after scythes that don’t uphold the commandments and seek to emulate the late Scythe Goddard.

Rowan has gone rogue, and has taken it upon himself to put the Scythedom through a trial by fire. Literally. In the year since Winter Conclave, he has gone off-grid, and has been striking out against corrupt scythes—not only in MidMerica, but across the entire continent. He is a dark folk hero now—“Scythe Lucifer”—a vigilante taking down corrupt scythes in flames.

Citra, now a junior scythe under Scythe Curie, sees the corruption and wants to help change it from the inside out, but is thwarted at every turn, and threatened by the “new order” scythes. Realizing she cannot do this alone—or even with the help of Scythe Curie and Faraday, she does the unthinkable, and risks being “deadish” so she can communicate with the Thunderhead—the only being on earth wise enough to solve the dire problems of a perfect world. But will it help solve those problems, or simply watch as perfection goes into decline?

There was a lot of politics in this book, more than in the last one. Citra, now Scythe Anastasia, junior Scythe to Scythe Curie, seeks to change the scythedom to prevent what Rowan went through and scythes seeking to take advantage of their killing abilities to manipulate their position in life. It’s not going quite as she would like or expect, except for the fact that she has some sway within the MidMerica scythedom, something she doesn’t want.

There are always going to be different ways to try and change the ways government, but there will be ways that will not work and there will be ways that will. And sometimes, the government will just be dissolved by those who do not agree. Trying to work with those who do not share your worldview can be tiring and it will  feel as though it’s not worth the effort. This book also shows that human flaws will be perpetuated into perpetuity because don’t change much as people by simple number alone. But by actively trying to do better and be better, we have a chance to change the world to the world we actually want it to be.

What are some things you are working on changing? What do you do when you have to work with someone with a very different perspective than you? Comment below and let me know!

P.S. Also, the cover and title reveal for the third book came out! It’s called The Toll and it’s cover is beautiful!

A Study in Honor by Claire O’Dell

Another ARC from ALA New Orleans, I highly enjoyed this book! It’s a futuristic LGBTQA version of Holmes and Watson. I absolutely love it!

Dr. Janet Watson knows what happens during a civil war. She knows the damage that can be wrought when two sides of a nation turn on one another. As a field surgeon, Dr. Watson also knows what this damage has cost her; her arm and her career. She makes her way to Washington D.C. where she seeks to make sense of her life with a semi-functioning mechanical arm that replaced the arm she lost in the field. Unsure of what to do and lost in this world she never thought she would leave, Watson struggles to find her way. When Watson meets another queer black woman by the name of Sara Holmes, she starts to find her way.

When Watson and Holmes start living together, Watson has found a job that puts her back in the medical field, but she is frustrated by her new roommate. But she forgets that frustration as her work is starting to poke a mystery in her face. Soldiers that had fought in the New Civil War are coming back and dying one by one, not on the battlefield, but in their homes. As Watson looks into her patients to figure out what is going on, she triggers something much larger, something that could potentially level the nation as they know it.

I absolutely loved how you still have all the original flavors of the Sherlock Holmes stories, but there is still a new story, a new dynamic, a new set of mysteries to solve for Sara and Janet. The only thing that I would say I wasn’t a complete fan of was how Sara Holmes attained her information, but it makes sense in this new world that takes place not many years from us.

What retellings of Sherlock Holmes are your favorite? Or your least favorite? Comment below and let me know!

Ready Player One by Ernest Cline 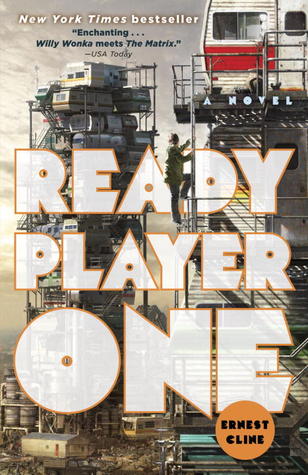 This was such an excellent book! Thank you school for making me read books I’ve been wanting to read for a long time!

Anyway, Ready Player One is about a teen who not only discovers the first clue to a major hunt that would change the world of immersion playing but his world as well. Wade Watts, known as Parzival in the OASIS, is a low-level player in a world where being high level lets you do what you want and need to do. All that changes when he figures out the location to the first key that will lead to the first gate of Halliday’s Hunt. Halliday’s Hunt is the biggest thing to hit the OASIS since the OASIS itself. Those that solve the three riddles and beat all three gates will inherit all of Halliday’s fortune.

For five years, nothing moved forward and everyone finally stopped really talking about it, until Wade figures out that the first area in on the one planet he’s allowed to be on. As soon as he figures it out, he is placed on the scoreboard that had no names on it before. Once again, Halliday’s Hunt is all that everyone can talk about, now that there is some progress actually being made towards the prize. At first, being a celebrity is all that Wade kind of dreamed it being until a large corporation turns their eye on him in order to get the information needed to move forward in the Hunt as well. When he refuses, Wade’s world goes up in flames. He retreats to fully to the OASIS, and there he finds love and adventure and everything he believes he’s wanted.

Things start to fall apart though when the corporation starts to hunt Wade inside the virtual world as well. They fall apart so much that Wade loses all that he thought he needed in a matter of days. As Wade struggles to refocus on the Hunt, he realizes that there’s so much in the world that could go wrong. And it all depends on who wins the hunt. Will Wade be able to focus on the hunt again and retrieve the prize? Or will the virtual world as he and everyone else knows it, come to an end?

Such an excellent book! I loved this so much, it was a game that I could get into. I just want have OASIS be a real thing, and we’re getting closer and closer to this reality each day, but to have it an actuality would be amazing!

What’s been your favorite new world to explore in books? Would you like to live there, or just visit? Comment below and let me know! 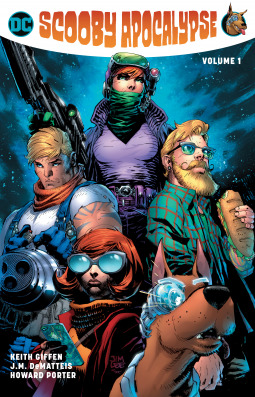 Scooby Doo as I never knew before! And I LOVE it!

This was such an excellent comic book! Oh. My. Gosh! I love it so much! *fangirls* Okay, I’m done now. On to the review!

Scooby Apocalypse is your newest adventure in the adventures of Scooby Doo and the gang. Velma, Daphne, Fred, Shaggy and Scooby are separated. This is the adventure that brings them all together. Fred and Daphne are cameraman and journalist respectively, Velma is a socially awkward, highly intelligent scientist who believed what she was doing was best for the world, and Shaggy and Scooby are partnered together for a government-funded project to create “smart-dogs.” They all come together when the whole world goes to shit, but not in the way that even Velma could have thought of.

There is a nanite virus spreading throughout the world and it’s up to Scooby and the gang to figure out what is going on, how it came to be, and how to fix and expose to the world what’s going on. If you love the original Scooby Doo TV show as well as modern reinterpretations of nostalgic shows, then you need to read this comic! And fangirl along with me! I love this modern retelling, it completely jives with who I think the originals are, but also with who I think they would be in this time and age as well. The art is also beautiful! So damn beautiful!

What have been some of your favorite nostalgic TV shows? Or their reinterpretations? Comment below and let me know! I need more to read!

We Stand on Guard by Brian K. Vaughan

Most people think of comics as the land of fantastic heroes and noble causes. This is not the case with We Stand on Guard. This is a comic about “what if” America and Canada came to odds. What would happen? We find out through the eyes of Amber Roos, a girl who’s mother and father was killed in the initial attack on Ontario, and has been on the run with her brother for 12 years. With her brother captured, Amber is on her own and she runs into the 2-4 Squad, a group of intrepid civilian Canadians who seek to run the Americans out of their country.

Unlike others, this is all there is. Though a short story, it is an impactful one that shows that the killing of someone’s parents doesn’t always make that person into a hero; sometimes, it’s the little push they need to become the bomb that will push others back.

What do you think would happen in a hundred years? Would we as Americans become so desperate as to invade our neighbors to the North? Or would we go some other route to save ourselves? Or is there still too much that we don’t know about the future to even be sure?