The Girl in Red by Christina Henry 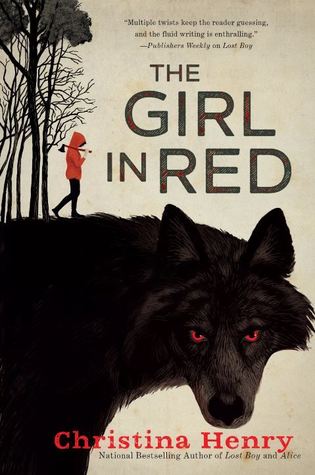 I had received an ARC from NetGalley, but I just forgot that I had it to read it or that I had it at all, so this is a copy that I actually bought from Barnes and Noble that I’m reviewing. The premise grabbed me from the beginning and it’s something I was so looking forward to reading.

It’s not safe for anyone alone in the woods. There are predators that come out at night: critters and coyotes, snakes and wolves. But the woman in the red jacket has no choice. Not since the Crisis came, decimated the population, and sent those who survived fleeing into quarantine camps that serve as breeding grounds for death, destruction, and disease. She is just a woman trying not to get killed in a world that doesn’t look anything like the one she grew up in, the one that was perfectly sane and normal and boring until three months ago.

There are worse threats in the woods than the things that stalk their prey at night. Sometimes, there are men. Men with dark desires, weak wills, and evil intents. Men in uniform with classified information, deadly secrets, and unforgiving orders. And sometimes, just sometimes, there’s something worse than all of the horrible people and vicious beasts combined.

Red doesn’t like to think of herself as a killer, but she isn’t about to let herself get eaten up just because she is a woman alone in the woods…

Red is alone in the woods. She is making her way to her grandmother’s house in the woods. And she must look out for those who would see her and see an easy target, someone to eat up.

Red is amazing, I love her and her characterization. She is a paranoid girl who actually prepared for the apocalypse, or at least she is prepared to not believe the government when they say they must be quarantined for their own safety. As Red and her family try to get ready to hike out to Grandmother’s house, she realizes that her family doesn’t appreciate the danger they are in, that the world as they know it has come to an end, and it frustrates her to no end.

To me, Red is a character that a lot of people can relate to. She is someone who has been told her whole life that she cannot do something, that she is either too weak, too soft, too hard, too anything to be doing something correctly. She does all that she can to prepare, to be ready, to keep her family safe and sound and together. But when things devolved and her family ended separated from her, Red continues forward, she continues onto her Grandmother’s house.

What do you think is going to happen during the apocalypse, should it come? Do you think the human race will survive? Comment below and let me know!

3 thoughts on “Tiny Navajo Reads: The Girl in Red”