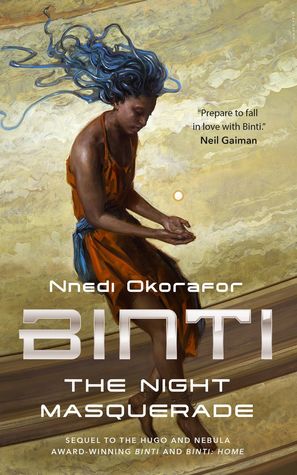 The final book in the Binti series, we see what has happened to cause essentially another war between the Meduse and Khoush, the violence now touching Binti’s family and the Himba.

The concluding part of the highly-acclaimed science fiction trilogy that began with Nnedi Okorafor’s Hugo- and Nebula Award-winning BINTI.

Binti has returned to her home planet, believing that the violence of the Meduse has been left behind. Unfortunately, although her people are peaceful on the whole, the same cannot be said for the Khoush, who fan the flames of their ancient rivalry with the Meduse.

Far from her village when the conflicts start, Binti hurries home, but anger and resentment has already claimed the lives of many close to her.

Once again it is up to Binti, and her intriguing new friend Mwinyi, to intervene–though the elders of her people do not entirely trust her motives–and try to prevent a war that could wipe out her people, once and for all.

Don’t miss this essential concluding volume in the Binti trilogy.

In this final book, we see Binti work with her newest friend Mwinyi from the Desert People, to hopefully, finally bring peace to the Meduse and the Khoush. Unfortunately, when things start to come to a head, violence fall upon her family, Binti is far from home. By the time she gets back home, things have been destroyed, both for the Himba and for Binti.

While her elders don’t quite trust Binti because she no longer looks or acts Himba, they let her act as an intermediary between the Meduse and the Khoush. But not everyone is willing to let go of their hatred and someone shoots during the peace negotiations. Things go south and Binti is taken from her home again. I won’t spoil the ending, but it continues the themes of the past two books of change and accepting that change and how change is not always a bad thing.

What do you think of science fiction? Do you enjoy it or not? Comment below and let me know!