Thursday Threes: Books Recommended to Me

Hello again guys! I know that I missed last Thursday, but I’m learning to have posts ready the day before if I’m working a morning shift! Anyway, today we’re going to be talking about three books that have been recently recommended to me thanks to my fellow librarians! Which means they are extremely good books for me to read!

The Book of M by Peng Shepherd – recently recommended to me by my friend/coworker Megan who has an excellent taste in books and this one just sounds like it would be amazing anyway!

One afternoon at an outdoor market in India, a man’s shadow disappears—an occurrence science cannot explain. He is only the first. The phenomenon spreads like a plague, and while those afflicted gain a strange new power, it comes at a horrible price: the loss of all their memories.

Ory and his wife Max have escaped the Forgetting so far by hiding in an abandoned hotel deep in the woods. Their new life feels almost normal, until one day Max’s shadow disappears too.

Knowing that the more she forgets, the more dangerous she will become to Ory, Max runs away. But Ory refuses to give up the time they have left together. Desperate to find Max before her memory disappears completely, he follows her trail across a perilous, unrecognizable world, braving the threat of roaming bandits, the call to a new war being waged on the ruins of the capital, and the rise of a sinister cult that worships the shadowless.

As they journey, each searches for answers: for Ory, about love, about survival, about hope; and for Max, about a new force growing in the south that may hold the cure.

Skyward by Brandon Sanderson – while I have already read this book, 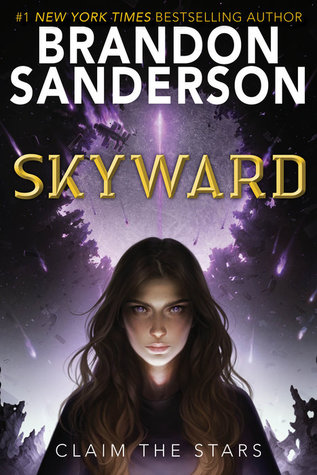 Defeated, crushed, and driven almost to extinction, the remnants of the human race are trapped on a planet that is constantly attacked by mysterious alien starfighters. Spensa, a teenage girl living among them, longs to be a pilot. When she discovers the wreckage of an ancient ship, she realizes this dream might be possible—assuming she can repair the ship, navigate flight school, and (perhaps most importantly) persuade the strange machine to help her. Because this ship, uniquely, appears to have a soul.

Ship of Theseus by J.J. Abrams and Doug Dorst – this was recommended to me by a manager at the library who found out that I like books that have been written in and that this was a book that dealt with this aspect of reading specifically. This is one that I’m excited to read!

One book. Two readers. A world of mystery, menace, and desire.

A young woman picks up a book left behind by a stranger. Inside it are his margin notes, which reveal a reader entranced by the story and by its mysterious author. She responds with notes of her own, leaving the book for the stranger, and so begins an unlikely conversation that plunges them both into the unknown.

The book: Ship of Theseus, the final novel by a prolific but enigmatic writer named V.M. Straka, in which a man with no past is shanghaied onto a strange ship with a monstrous crew and launched onto a disorienting and perilous journey.

The writer: Straka, the incendiary and secretive subject of one of the world’s greatest mysteries, a revolutionary about whom the world knows nothing apart from the words he wrote and the rumors that swirl around him.

The readers: Jennifer and Eric, a college senior and a disgraced grad student, both facing crucial decisions about who they are, who they might become, and how much they’re willing to trust another person with their passions, hurts, and fears.

Have you had any recommendations lately? Who were they from and did you take them? Comment below and let me know!