Death on the Nile by Agatha Christie, read by David Suchet 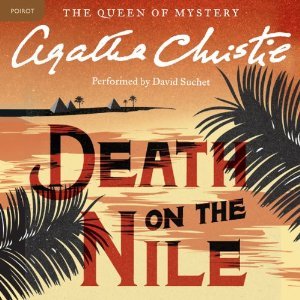 I love Agatha Christie’s novel and I love Hercule Poirot. I have read other mysteries by Dame Christie, but I had not actually read this one. I have seen the movie if that helps any, so I knew who was who and roughly what was going on as I listened, but I was still entranced and I loved going along with M. Poirot as he seeks to find the murderer.

The tranquillity of a cruise along the Nile was shattered by the discovery that Linnet Ridgeway had been shot through the head. She was young, stylish, and beautiful. A girl who had everything … until she lost her life.
Hercule Poirot recalled an earlier outburst by a fellow passenger: ‘I’d like to put my dear little pistol against her head and just press the trigger.” Yet in this exotic setting, nothing was ever quite what it seemed.

What better backdrop for a murder than that of the Nile river? What better motive is a jealous and stricken ex-fiancee? And who better to find out what the heck is going on than the famous detective, Hercule Poirot?

All in all, I highly enjoyed this book, as I knew that I would. I love Agatha Christie and I love mysteries like this, where it’s the main character is working against the clock, rather than madman to figure out what has happened. I liked that even though the murderer was thought to be easily found, there was more and more intrigue going on the steamboat than originally thought. Everyone on that boat has a sordid past or something to hide. And no one wants to see what Hercule Poirot will turn up in his investigations.

The only reason I’m giving this a 4/5 stars rather than a 5/5 stars is that with the narrator, I sometimes could not understand Hercule Poirot the character! His accent was very thick, and I know that it’s because he’s Belguim and that’s how Dame Christie wrote him. That was my only quibble, and it’s a very small quibble at that.

Have you read any of Agatha Christie’s books? Which ones? Did you like the mysteries? Comment below and let me know!

3 thoughts on “Tiny Navajo Listens: Death on the Nile”