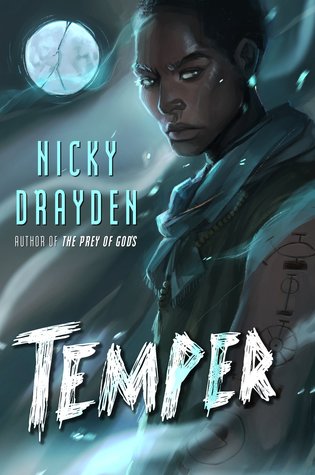 I had this book recommended to me through a science fiction books newsletter that I get every once in a while. It was talking about new releases and Temper was mentioned in it. I thought the premise was interesting, so I thought I would give it a try.

On the southern tip of an Africa that could have been, twin brothers struggle to not only live together but to overcome their vices. In a world where nearly everyone born at birth is a twin and has the seven deadly sins and seven heavenly virtues split between them. For Auben Mutze, he has more vices that he can handle, six vices to be exact and one virtue to handle them. Yet, he won’t let the fact that he has six vices destroy his life, though his life may not involve his twin Kasim, who has only one vice and six virtues, basically guaranteeing him a better life, a life without Auben.

The twins relationship becomes strained as a voice starts to encourage Auden’s dangerous side, his vices, vices he has worked hard to keep under control. Greed, lust, and vanity all start to run rampant and now there are blood cravings as well. As the seasons change and the world becomes colder, Auben must do what he can to either control or rid himself of the maddening voices talking to him before they cause him to lose his sanity, his life, and possibly his temper.

Now, preface this by saying I did highly enjoy the premise. It was interesting to see a world where everyone has a twin and you are divided by what vices and virtues you are born with. I think though I may have in over my head a little bit as I was initially reading it as I got a little lost and confused about halfway through the book. And there seemed to be a few too many plotlines to follow. Don’t get me wrong, I can follow a multitude of plotlines and characters, but I think they may have been crammed into too small of a book for as many as were in this one. I do also acknowledge that the plots may not have worked in a larger book because of how little there was to each. As stated in my review on Goodreads, I think this book may have done better as duology or as a trilogy. It was still really good, just a bit too much for one book to hold in the best way possible.

I liked Auden and that we follow his progression and his point of view. We see this could have been Africa from his point of view and we experience what it’s like to have six vices in a world that discriminates against that. We see what it’s like to grow up close with a sibling to only feel like they are trying as hard as they can to run away from you, and we see what can happen when others are pushed away from reasons unknown. I liked all that was done in the book, just the execution of the book could be a little better. Or it just may be that I need to read the book a second time in order to truly understand what’s going on.

Nicky Drayden’s world building is fantastic and her writing catches you and sweeps you up into the story right away. I loved that and I think to truly enjoy this book, I may need to read it a second time.

What new releases have you tried based on newsletter recommendations? Did you enjoy them? Comment below and let me know!