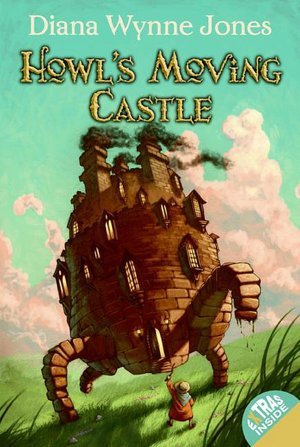 Do you love Studio Ghibli? Do you love reading the books that films are based on? Do you like magic and snark? Do you just feel like an 80-year woman in a 20-year-old body? If you, then you would love Sophie and her trying to deal with Howl’s moving castle.

Sophie is the eldest of three daughters of a hatmaker, thus she believes she is destined to fail should she seek out her fate. As her younger sisters have left home to seek their own fate, Sophie takes her place making hats at the hat shop she will eventually inherit. But something strange starts to happen to the hats she talks to, the hats seeming to draw in more and more patrons who want hats in the style that Sophie has talked to. One night though, a new patron comes in who wants to try the hats that seemed to have called her. After trying all the hats, this new patrons casts a spell on Sophie, making her an old woman. Deciding that she can no longer stay in her hometown, Sophie leaves her home and her town to find the Wizard Howl and see if he can’t take the spell of her.

As she makes her way through the hills, she is able to make her way into the castle itself where she meets Calcifer the fire demon, Marco the apprentice, and Howl the notorious heart-stealing wizard. Sophie makes a deal with Calcifer that they will break each other’s curses; Sophie becomes the cleaner lady for the moving castle, trying to figure out exactly what is going on. As she does this, Sophie learns that there is more to herself and Howl than she ever thought possible. But she needs to figure it out what’s going on, in order to free herself and Calcifer.

While this is different from the movie, you actually get more of Sophie and her type of magic. I love this! This is so good, and if you loved the movie I believe that you should read this book!