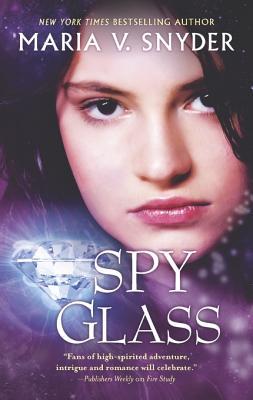 In this final book of the Glass Study series, we see Opal deal with no longer having magic of any sort, having drained her blood of all her magic to save her life and the lives of others. Moreover, she is now immune to the effects of magic as well. She is now similar to Valek, in that magic doesn’t affect her, but she can feel when it’s being used around her. She is now also an outsider in the world of magic, looking in on what she used to have. Without magic now though, Opal is finally able to do what has forever been out of her reach, create blown glass sculptures, now that she can blow air into glass, rather than magic.

Throughout this last book, we see Opal struggle to find out what she’s supposed to do now that she has lost her powers, till she discovers that she can spy through glass, or at least, she can spy when magic is being used through her new glass creations which flash when magic is being used nearby. Opal also discovers that there may be a way for her to recover her magic, as Ulrick, her ex-lover turned Blood Warper, has stored a vial of her blood somewhere. As she travels to find where her blood may have gone, and whether anyone has used it, she finds out that she is not the only one who seeks out her blood and the power that it could bring to anyone else who uses it.

This being the last book in the series, I found this to be my favorite in the series actually. It was much more action-packed and fast-paced that I expected, and I enjoyed it. This is where we see Opal grow up and mature the most and start to trust herself again. I enjoyed seeing her grow to her potential and figure out her own place with her very weird powers, or lack thereof.

Who has been your favorite character to see change and grow in a series? Why did you enjoy seeing them grow? Comment below and let me know!