The Battle for Skandia by John Flanagan 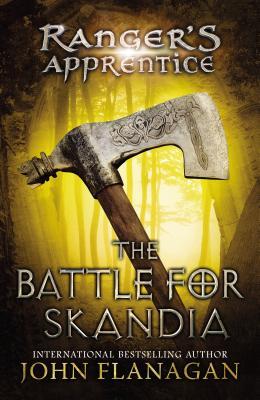 As we continue our adventure from the last time we visited this series, Will and Evanlyn are still in Skandia, having survived the winter. As they decide to make their way back to Araluen, Evanlyn is captured and Will struggles to rescue his friend. As he finds Evanlyn, he realizes that there’s not much that he can do to save his friend, and death is starting to close in. But miracle of all miracles, Halt and Horace swoop in to save the day!

Halt recognizes the captors, and what this means for Skandia. As the group tries to make their way back to Araluen, they are stopped by Erak, the skarl that originally saved Will and Evanlyn in the previous book, The Icebound Land, and accused of killing those in an outpost. Their evidence being they were all shot with arrows, the Ranger’s chosen weapon of choice. As Halt shows Erak who is really invading Skandia, the Temujai, a warlike people from the Eastern Steppes. Halt knows how to fight these people, how they think and how to defeat them. He offers his information in exchange for the safety of Will and Evanlyn. Will they be able to turn the Temujai back, or will things dissolve into war?

What was your favorite book series when you were growing up? What was it about? Tell me below and let me know! I’m always looking for new books!